Do you love our Breyer model horses? Breyer Animal Creations started out in the late 1940s as Breyer Modeling Company in Chicago, Illinois. Sam Stone and Charles Schiff made plastic parts for anything you can think of from airplanes to clocks in your home! When they received a special order in 1950 the Breyer Company changed forever…. 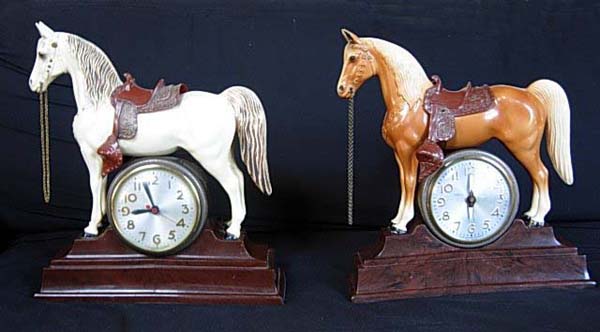 Mastercrafters, another Chicago based company that made clocks and used plastic pieces from Breyer for their clocks asked Breyer to make them a horse for a new clock design. Sam Stone based the design for the horse for Mastercrafters after the “Large Western Champ” model horse that was previously made by Hartland. You can learn more about Hartland and their model horses here!

When the Mastercrafters Western horse Clock hit the Woolworth’s stores people couldn’t get enough! People were calling to order not only the clocks but the model horse by itself. Breyer had just entered into the model horse industry without even knowing it.

There is controversy over where Breyer got its inspiration for each model. Other companies like Hartland, Boehm, Hagen-Renaker, and Grand Wood Carvings, were producing model horses and animals before Breyer. Collectors spend a lot of time tracking the history of molds and original models. There is a great site where You can learn about your models! But Breyer did a great job marketing their animals and getting them in the hands of the right people.

Here is a look some of the original catalogs for retailers. The models sold for $37.70 per dozen! In 1984 Reeves International, a privately held company out of New Jersey, purchased Breyer. Reeves is owned and operated by Tony Fleischmann, we met him when we went to Breyerfest a few years ago. Reeves has kept the Breyer tradition alive coming out with new models every year. In 2005 Breyer model horses started being sold in the UK and are now sold in: Canada, Russia, Italy, France, Spain, Greece, Australia, New Zealand, Mexico, Hungary, Kazakhstan, Ukraine, and South Africa. Breyer just celebrated their 65th Anniversary in 2015 with a reproduction of their original Model #57 Horse, Glitterati. Though the packaging and variety has changed a bit from the 50’s Breyer model horses are still a great quality product!

Breyer models come in various sizes. The original size, known as Traditional, is a 1:9 scale and the most popular size. The next size down was released in 1973, the Classics, a 1:12 scale. The classics make great collector items for younger children since they have abundant gift sets and durable accessories. They quickly became a

favorite with their smaller size and lower price point. Stablemates, an even smaller model, are a 1:32 scale, these little guys are a fun pick up and their accessory line grows every year. They were released in 1975 but their popularity has really spiked in the last few years. Slightly larger than Stablemates but no longer around were the Little Bits (or Paddock Pals), they came out in 1985 but were only around for a few years. The newest and smallest addition to the Breyer scale are the Mini Whinnies released in 2005. These little guys are only about an inch tall and Breyer does fun mystery packages and other promotions with them.

I (Maddy) started collecting Breyer models at a very young age. My first Breyer was a Classic set #3347 the Trakehner Family. The stallion from this set has seen better days and has had to have one of his legs repaired a few times, he now always wears polo wraps (homemade by young Maddy) to cover his scar. He took a fall off a cliff inspired by the famous Lion King scene with Scar and Mufasa. Her first traditional sized model was #494 Llanarth True Blue a Champion Welsh Cob. Of course at a young age I did not realize he was not a Clydesdale and the famous Budweiser Horses had just been to Saratoga Springs so I named him Clyde. He is a very noble model and was always the wisest horse in the stable. My all-time favorite model was Hank #750, the Appaloosa Ranch Horse. Hank was the perfect model, he fit in every saddle, blanket, and accessory. And Hank was the perfect horse, he knew every discipline and was loyal to his rider. Hank was always the hero protecting the foals and mares from all kinds of dangers and always causing a little mischief himself. Hank was “cool.” Some of my Breyers are at the store now on display in the doll house but most are at home safely stored for now… I don’t have the shelf space for them! They all have had a very good life; pampered and loved. Though I don’t collect anymore, I stopped when I got a real horse, I still look at all of my Breyers fondly and they all have special memories.

Because we are Impressions of Saratoga we thought we would look into which Thoroughbreds and Standardbreds have been made into Breyer Models… there a quite a few!

We are hosting a Breyer Fun Day on May 19th! Check out the details here!

Sadly we are not able to get to Breyerfest this year but it is Racing Themed! We are very excited about this! Check out info about that here!

Keep collecting and enjoying your models! And if you ever need help when with your Breyers here at the store I am always happy to look through each box with you! It is fun to see what kids are picking today and I love being able to share stories about Breyers! I try to stay up to date on models and who works with what accessories! Collecting Breyers is a great way to start a stable right in your home!