Wow! What a summer! This year has just flown by!

This was my third summer as the mascot for “The Dark Horse” and Impressions of Saratoga and it may have been my favorite. I got to see so many people each week when I was at the store but I also was able to go to some new events around town. Probably the most exciting thing for me was meeting my new friend! A Miniature Horse as well, Poppy, is just about the same size as me, only a little rounder. He is white/grey and has a great mane, even fluffier than mine! He now lives with me and we spend our days in the sun napping or eating grass. Sometimes we run and play too! He is still pretty young and is not sure if he wants a career in the mascot business but I have been teaching him what to do just in case. 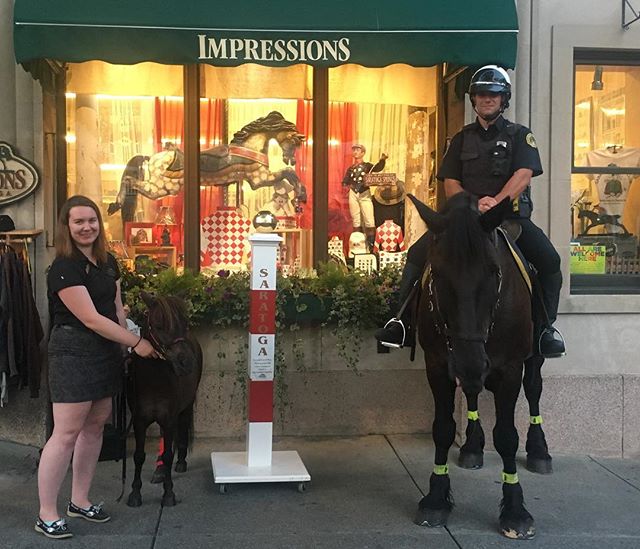 Poppy isn’t the only horse friend I have. There is King Tut, a Percheron, who is a Saratoga Springs Mounted Police Horse. He and I are best buddies. Everyone gets a real kick out of us hanging out because we are the exact same color but he is just a tad bigger than me! Apollo, a Standardbred, just started working for the Saratoga Springs Mounted Police this summer. He and I have only met a few times but he is pretty cool. He used to be a harness racer. He seems to be liking his job and I enjoyed meeting him. 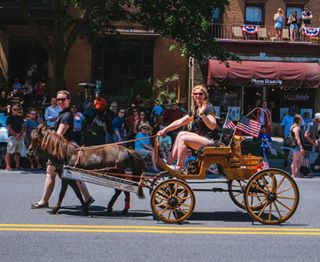 I was in two parades again this summer. The Saratoga Wilton Elks Lodge Flag Day Parade and Saratoga’s All American Celebration’s Fourth of July Parade. Both had great weather thank goodness! The first Parade Maddy rode in the cart, which was silly. The second one Clara, Myra, and Smitty rode in my cart. That was much better!

Of course I had my weekly visits at Impressions of Saratoga, usually on a Monday or Thursday (though some were rained out). They set up my tent in front of the store and I get to eat hay and be pet by all of my friends. This summer I got into the habit of falling asleep toward the end of my shift… all of the petting and a full belly just relaxed me! I met people from all over the country. The Impressions girls and I taught everyone a lot about horses and the legend of The Dark Horse. Lots of people think I am a baby horse even though I am full grown. I may be tiny but I have a big personality to make up for it! I got to go to the Saratoga Polo Association matches almost every other week and I love going there. Not only do I get to eat grass while working, I also get to drive in my cart before the match and I get to see the big horses play polo. There is always a great crew of kids at Polo. Cliff Oliver took one of my most favorite photos ever of myself with my new friend Anna Rose. It is precious. She was very sweet. If you haven’t been to a polo match make sure you get there next year, it is a great time!

For the first time ever I made my appearance at Lake Avenue Elementary School. The kids were learning about different animals and I was one of the live animals they got to meet! I really like hanging out with the kids, though I got a little to antsy sometimes and Mare and Maddy had to make me stand still. But the kids asked lots of funny questions and wanted to see my teeth. I think we taught them a bunch of new things and I learned a lot too! I hope I get to go back to Lake Ave some time, school is fun. The kids gave me thank you letters, I saved all of them… they were so sweet! Another new event for me was Equestricon. I spent two days there greeting guests as they entered the City Center. It was pretty neat. I even got an official VIP Pass. I met a new friend there, Marion Altieri, she wrote a very flattering article about me on her blog. You can check it out HERE. While I was at the City Center I told passersby about Equestricon an all new Thoroughbred Racing Convention that was put together by a great group of racing enthusiasts. I can’t wait for next year’s event. There is still some great merchandise left from the event if you are interested you can shop HERE. Overall my summer was pretty awesome. It was exhausting and I had to keep Mare and Maddy from getting bored when we weren’t at events by rolling in the dirt. I work really hard on being as dirty as possible and they are constantly brushing me and giving me baths. They love to fuss over me… I hate it! But it is part of the job so I put up with it. Being a mascot is a lot of work but it is very rewarding.

I am looking forward to my next big event the JDRF Walk at Saratoga Race Course on October 14. I actually have a team with the Impressions Crew, they called it The Dark Horses, of course! You can join us in the walk or sponsor us. I will be leading the group! I hope to see you all there! Join us HERE.